Associated Builders and Contractors (ABC) today reported that its Construction Backlog Indicator(CBI) expanded to 9.67 months during the fourth quarter of 2017—its highest level ever and a 2.25 percent increase from the prior quarter. Backlog records were broken in the Northeast region, the commercial/industrial segment and among firms with $30 to $50 million in annual revenues. CBI is up by 1.36 months, or 16.3 percent, on a year-over-year basis.

“During the fourth quarter of 2017, the CBI established an all-time high, breaking records set during both the first and third quarters of last year,” said ABC Chief Economist Anirban Basu. “The implication is that the average nonresidential construction firm entered 2018 with significant momentum. Construction spending is set to be elevated this year under virtually any conceivable scenario.”

“As always, there is reason for some concern. While 2018 is likely to be a solid year for construction spending, there are grey clouds emerging from the silver linings. A trade dispute with Canada has helped push softwood lumber prices higher. Recently announced tariffs on steel and aluminum may have similar effects. Indeed, inflationary pressures are building in various elements of the economy, including wages, health care, homes, apartments and tuition. The result is an increasingly inflationary economy likely to produce higher interest rates over time,” said Basu. “Should interest rates rise too quickly, backlog is likely to eventually decline as fewer developments are green-lighted due to higher borrowing costs.” 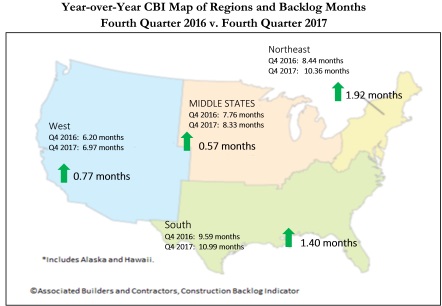 Backlog in the South fell 2.9 percent during the fourth quarter, but remains nearly 15 percent higher on a year-over-year basis. Southern markets such as Orlando, Atlanta, Nashville, Dallas and Austin continue to be associated with significant construction momentum. The storms of several months ago also have helped lift backlog in Houston and other impacted communities.

Backlog in the Northeast expanded for a fifth consecutive quarter as cities like Boston, New York and Philadelphia continue to experience brisk commercial investment. The region’s backlog has expanded by nearly 23 percent during the past year and now stands at its highest recorded level.

Backlog in the West continued to rise during the fourth quarter, but still stands at just 7 months. The 2017 California wildfire season, which was the most destructive on record and burned nearly 1.4 million acres, likely stalled a certain volume of construction projects and suppressed fourth quarter backlog.

Backlog in the commercial/institutional segment expanded briskly for a second consecutive quarter. At 10.1 months, the segment’s average backlog is at its highest level in the history of the series.

Average backlog in the heavy industrial category fell for a third consecutive quarter. At 5.2 months, the segment’s backlog is down 5.2 percent on a quarterly basis and 5.8 percent on a year-over-year basis. CBI has neatly predicted recently observed declines in construction activity related to U.S. manufacturing.

Backlog in the infrastructure category inched up to 12.55 months during the fourth quarter, the highest reading on record for the segment. Improving state and local government finances are helping spur additional public construction, including in the education, public safety, highway/street and transportation categories.

Large firms, those with annual revenues in excess of $100 million, have experienced skyrocketing backlog during the past year. The combination of large-scale commercial/mixed-use development and stepped up public construction activity has produced an average backlog approaching 14.6 months. Backlog for the nation’s largest nonresidential construction firms is up an astonishing 35 percent during the past year.

Backlog among firms with annual revenues between $50 million and $100 million fell by 0.8 months in the fourth quarter and currently stands at a still-healthy 10.73 months. Backlog for this category is at its second highest level since the late stages of 2013.

Firms with $30 million to $50 million in annual revenues experienced their fifth consecutive quarter of rising backlog. The fourth quarter reading of 11.89 months surpasses the third quarter of 2012 as the highest on record.

Backlog for firms with annual revenues below $30 million increased by 0.4 percent during the fourth quarter and remains remarkable steady. For the past three years, backlog for this category has remained in a tight range between 7.2 months and 8.1 months. It is conceivable that the lack of pronounced growth in backlog for this group is due to a lack of available workforce. The lack of a reliably available workforce renders it difficult for smaller firms to commit to the larger-scale projects that would pump up backlog.