The construction industry unemployment rate dove to 3.4 percent in July, recording its lowest level in the 18-year history of the series. The national unemployment rate for all industries inched down to 3.9 percent.

Nonresidential construction employment increased by 13,200 net jobs in July. Nonresidential specialty trade contractors added 8,600 net new jobs in July and have collectively added 60,300 net new jobs through the first seven months of the year. To put this in perspective, this is nearly double the amount added through the first seven months of 2017 (+32,200).

“While many observers will focus intensely on the headline employment growth number of 157,000, which was below expectations, today’s employment numbers provide more evidence that demand for workers remains elevated,” said ABC Chief Economist Anirban Basu. “Employment growth estimates for both May and June were revised higher. The official rate of unemployment fell to 3.9 percent. Nominal wage growth remains steady. Both construction and manufacturing continue to add jobs in America.”

“The issue, therefore, is not really about demand for human capital, but supply,” said Basu. “There may well have been times during the nation’s history when construction industry unemployment was even lower, but relevant statistics characterizing those periods do not exist. What we know for sure is that contractors will continue to scramble for workers in the context of aggressive spending on structures and other forms of construction.”

“The real mystery is how the construction industry has managed to find 308,000 net new workers over the past year given all the narratives regarding a lack of available carpenters, electricians, welders, glass installers, etc.,” said Basu. “One hope is that more workers are gravitating toward construction, which offers increasingly rare opportunities for people to enter the middle class without taking on student debt. The other hope—and there is evidence to suggest this is already occurring—is that companies will invest heavily in the capabilities of these people inducing more of them to stay in the industry even during the next downturn.” 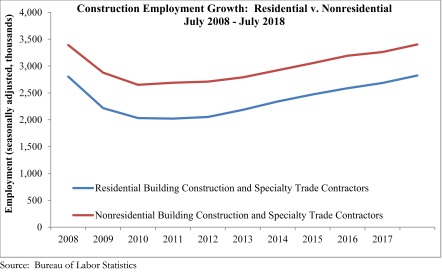