Based on recently released data from the U.S. Bureau of Labor Statistics, the U.S. construction industry bounced back in April, adding 17,000 net new jobs, according to an analysis by Associated Builders and Contractors (ABC). Last month, initial estimates showed a 15,000 jobs loss, though that has since been revised upward to a loss of 10,000 jobs. During the past year, the construction industry has added 257,000 new jobs, representing a growth rate of 3.7 percent.

Overall, the construction industry unemployment rate, available only on a non-seasonally adjusted basis, fell 1.1 percentage points to 6.5 percent. While remarkable, it is slightly higher than the 6.3 percent unemployment rate of one year ago. The national unemployment rate, after stagnating at 4.1 percent for several months, finally dipped below the 4 percent mark, settling at 3.9 percent. This is the lowest rate since December 2000.

“Second, the data indicate continued momentum in private nonresidential construction activity, which has served as the primary source of industry growth,” said Basu. “However, public activity continues to be soft, as reflected in the lost employment in the heavy and civil engineering category last month.

“The decline in national unemployment to 3.9 percent offers both positive and negative news,” said Basu. “The positive news is that the U.S. economy continues to flourish, creating new opportunities for job seekers. This should help support continued consumer spending growth. However, the dip in unemployment also foretells more inflationary pressure and higher interest rates. Higher borrowing costs make it more difficult to efficiently finance construction projects. To the extent that interest rates are likely to rise further, construction activity can be expected to flatten at some point in the middle and long term.” 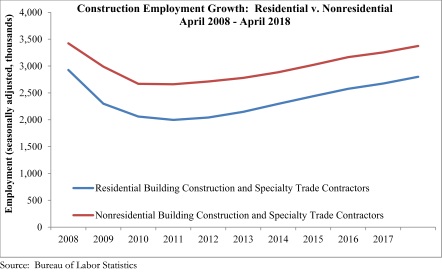