“Today’s employment report represents a source of encouragement for most contractors,” said ABC Chief Economist Anirban Basu. “There is evidence of ongoing hiring in both public and private construction categories. Perhaps most encouraging was the 6,100 net new jobs added in the heavy and civil engineering component, an indication of stepped-up infrastructure spending. This comes as little surprise since the ongoing economic expansion has helped to strengthen the balance sheets of state and local governments, positioning them to spend more aggressively on capital projects.

“The overall economy continues to produce jobs at a pace that exceeds consensus expectations,” said Basu. “Despite all the focus on rising interest rates, mounting inflationary pressures, tariffs and trade wars, the U.S. economy continues to deliver new opportunities for businesses and job seekers alike. In short, economic momentum persists. This strongly suggests that contractors will remain busy, and that additional opportunities to bid for work are in the cards.” 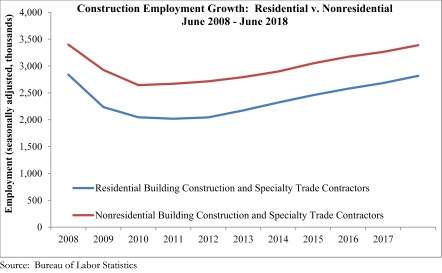