“Today’s GDP report essentially represented good news for U.S. economic momentum along all fronts with one possible exception,” said ABC Chief Economist Anirban Basu. “Most forecasters understood that first quarter GDP would be a bit weaker than the performance registered in prior quarters. This has become a staple of the GDP report, in which a strong fourth quarter, led by significant consumer spending, is followed by a weaker quarter associated with higher household saving rates and paying down of credit card balances. In that context, gross domestic product came in stronger than anticipated.”

“Nonresidential fixed investment represented one of the economy’s primary drivers during the first quarter,” said Basu. “Investment in this category, which encompasses nonresidential construction, rose 6.1 percent on annualized basis after growing 6.8 percent the prior quarter. These data are consistent with the notion that American business remains optimistic regarding near-term economic prospects despite discussions regarding tariffs and trade wars during much of the first quarter of 2018. These data are also consistent with the notion that businesses are spending at least some of their tax savings on expanding their investments into the broader economy.”

“The one possible drawback to today’s surprisingly strong performance relates to inflation and interest rates,” said Basu. “The U.S. economy continues to manifest substantial momentum at a time when full employment has been achieved or soon will be. This will continue to support faster compensation growth, which in turn will help produce higher costs for the provision of construction services. Contractors also continue to report rising materials prices, the result of both faster global economic growth and shifting policies on international trade. For contractors, this suggests that opportunities to bid on new work will remain plentiful, but that it will be difficult to sustain or grow profit margins as various costs continue to trend higher.” 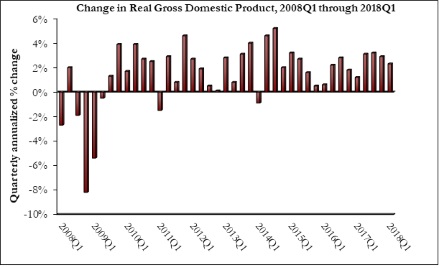