According to an analysis by the Associated Builders and Contractors of data released today by the U.S. Bureau of Labor Statistics, the construction industry lost 31,000 net new jobs in February. Overall, nonresidential employment decreased by 20,400 net new positions compared to January, with losses split between nonresidential building (-3,000), heavy and civil engineering (-13,200) and nonresidential specialty contractors (-4,200). However, industry employment is up 223,000 jobs since February 2018, an increase of 3.1 percent.

“Moreover, other weather-impacted sectors of the economy also registered job losses or failed to add jobs, including retail (-6,100), transportation and warehousing (-3,000), and leisure and hospitality (0),” said Basu. “While it’s likely that there were additional factors shaping today’s jobs numbers, such as side effects from the federal shutdown, there has been growing evidence of weaker global economic growth for months. A number of leading economic indicators have been suggesting that economic growth is set to slow. There also have been other disappointing data releases recently, including those pertaining to December retail sales.”

“The implication is that one cannot simply ignore today’s jobs report as pure aberration,” said Basu. “While it is likely that future months will be associated with better job growth numbers than today’s 20,000 jobs headline, U.S. economic growth appears to be generally softer in 2019 than it was in 2018. Today’s data also indicate lower construction unemployment and faster economy-wide wage growth, which all things being equal stand to negatively impact construction firm profitability. While recession is not immediately imminent, today’s jobs report should be considered a reminder that economic circumstances can change quickly, which means that contractors are advised to continue to manage cash flow carefully.” 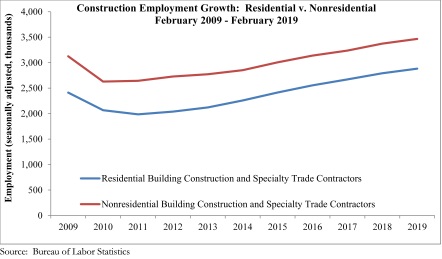