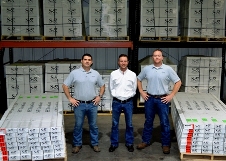 Colorado Springs, Colo.-based S-5! announced its 20-year association with Longview, Texas-based LMCurbs, which has sold more than eight million S-5! product components during that time. Rob Haddock, CEO at S-5!, says, “S-5! and LMCurbs have maintained a successful relationship because of our mutual commitment to genuine innovation and the highest quality standards.”

Clint Funderburk, vice president of marketing at LMCurbs, says partnering with S-5! has really proven to be a jointly-profitable business venture. “Each member on our carefully selected team represents the highest level of expertise in their respective skill,” he says. “So what we’re finding at LMCurbs is that architects and contractors look to us for answers when it comes to finding solutions for the most challenging aspects of metal roofing applications. We, in turn, are able to provide them with truly innovative and unique attachment solutions by S-5!”