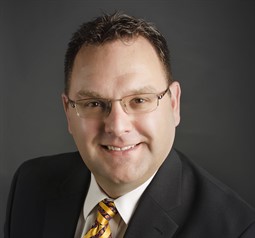 Scott Russell (Nucor Corp.) was presented with the first Norman W. Rimmer Technical Leadership Award in February 2017 by the
Metal Building Manufacturers Association (MBMA). The award was presented to Russell in recognition of eight years of exemplary service as Technical Committee Chairman, and as an advocate of the spirit of discovery and sharing of knowledge within the metal building systems industry.

“Scott’s work with the Technical Committee has been exemplary,” notes W. Lee Shoemaker, Ph.D, PE, director of research and engineering for MBMA. “Under his leadership the committee’s work continues to set the standard of cooperation for the entire industry. He is a deserving recipient of the first Norman W. Rimmer Technical Leadership Award and an excellent example of the type of leader MBMA needs to remain a strong advocate for the metal building industry.”

“I am truly honored to receive this recognition,” says Russell. “I am very humbled to be considered in the same conversation as past MBMA leaders like Norman W. Rimmer, as he established the tone and culture of sharing and cooperation that MBMA members still follow today.”

Norman W. Rimmer, who passed away in 2008, was a leader in the metal building industry for many years and was inducted into the Metal Construction Hall of Fame in 2014. As a committee member representing Butler Manufacturing Company, he attended the first meeting of the MBMA Technical Committee in 1957 and became the committee’s second chairman in 1962. He served in that role until 1971 and was widely acclaimed for establishing the culture of sharing engineering expertise for the benefit and growth of the metal building industry.

For more information about this award or the work of MBMA, please contact Dan Walker at mbma@mbma.com or 216.241.7333.