Associated Builders and Contractors reported today that its Construction Backlog Indicator contracted to 8.9 months during the fourth quarter of 2018, down 1.1 percent from the third quarter and 7.5 percent compared to a year ago. CBI reached a record high of 9.9 months in the second quarter of 2018 and averaged about 9.1 months throughout all four quarters of last year.

CBI is a forward-looking economic indicator that reflects the amount of work that will be performed by U.S. commercial, institutional, industrial and infrastructure construction contractors in the months ahead.

“Though backlog has dipped slightly in the last quarter of 2018, it remains high by historic standards,” said ABC Chief Economist Anirban Basu. “A number of factors contributed to the decline, including a surge in materials prices in early 2018, which likely hindered project planning and contract negotiations later in the year. Interest rates also rose during much of the year, potentially resulting in some projects being postponed or canceled. It is also likely that the feverish market volatility during the fourth quarter of 2018 caused some investors to hold off until the financial marketplace stabilized, which it recently did.”

“That said, backlog in the heavy industrial segment rose slightly compared to the third quarter of 2018,” said Basu. “In fact, with industrial production surging for much of last year and with capacity utilization on the rise, the industrial category achieved its highest level in the history of the series during the final quarter of 2019.”

“Backlog in the South expanded at a more rapid pace than in the other three regions during the final quarter of 2018,” said Basu. “This is not altogether surprising—Southern markets like Atlanta; Orlando, Florida; Charlotte, North Carolina; Dallas; and Nashville, Tennessee, are growing significantly. This has much to do with rapid population growth, which naturally creates demand for additional infrastructure. By contrast, the Northeast is hampered by growing concerns regarding overbuilt commercial segments and the Middle States are collectively beginning to feel the effects of an auto production cycle that may have peaked.” 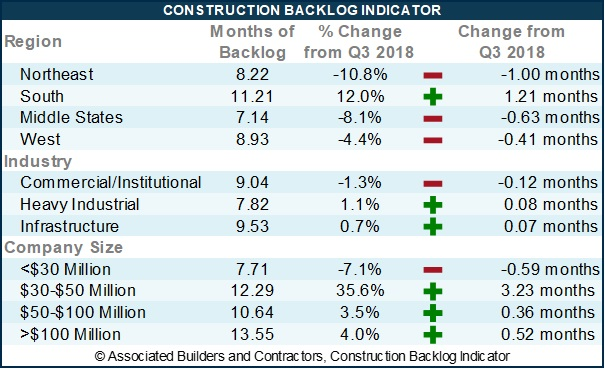 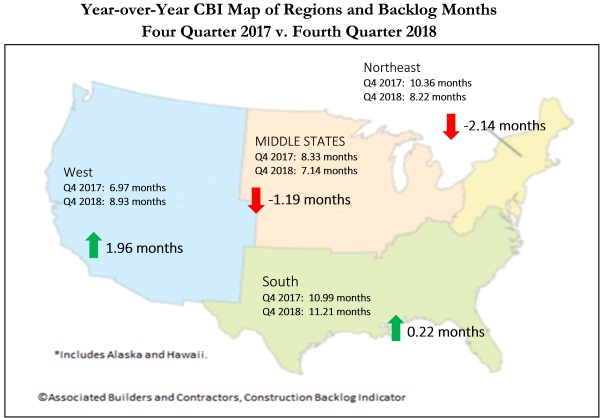