“What a difference a year makes,” said ABC Chief Economist Anirban Basu. “In early 2018, contractors and their customers were being hammered by rapid increases in materials prices. Not only were prices rising, but there were concerns about the availability of certain precious commodities, including domestically produced steel.”

“Many factors were at work back then, including tariffs on steel, aluminum and softwood lumber,” said Basu. “The global economy was experiencing its first synchronized expansion in about a decade, with every major world economy expanding simultaneously. At the same time, nonresidential construction activity in the United States continued to gain momentum as economic growth accelerated in 2017 and well into early 2018 and business investment surged in the wake of corporate tax cuts.”

“During the second half of 2018, the global economy has softened, helping to push oil, copper and other key commodity prices lower,” said Basu. “That has in turn influenced construction input prices. For contractors, this helps sustain profit margins at a time of rapidly growing worker compensation costs. For consumers of construction services, this should help lead to more favorable bids and greater likelihood that projects, whether publicly or privately financed, will move forward. These dynamics also help alleviate some of the economy’s inflationary pressures and should help keep interest rates and borrowing costs low.” 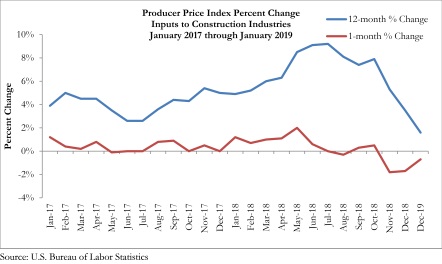